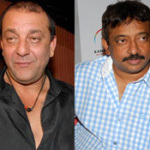 In Bollywood relationships change every Friday, at least that is what we could make out from the recent war of words between Sanjay Dutt and Ram Gopal Varma. Following the dismal performance of their movie Department at the box office, RGV and Sanju Baba can’t stop blaming each other.  The film which released last week was dismissed by the critics and the audience alike. Department could only manage to collect 7.50 crore in its first weekend and will entail heavy loses to the makers.

Before the film released, Sanjay Dutt had praised RGV and called him a great filmmaker. However after the movie flopped at the box office, the two have decided not to work with each other in the future!

Here’s how Sanjay Dutt and Ram Gopal Varma blamed each other for the failure of Department.

Sanjay Dutt:  I have been in the industry for 32 years and I know which cameras are suitable and which are not. But ab kya karen? Jo ho gaya so ho gaya. But yes, I really don’t know at this point of time if I want to work with Ramu again.

Ram Gopal Varma: The director posted his views in form of several tweets.

Well look like this war is not going to resolve any time soon. What are your thoughts on this?